This article was originally published on the London School of Economics Africa Blog.
—
Ghanaian blogger Jemila Abdulai looks back on a landmark election not just for Ghana, but the whole of Africa.
When it comes to African elections, one can always be certain of a healthy dose of unpredictability. From delays in delivering voting equipment to unexpectedly large voter turnouts, any African election fits the bill for a full-length movie, complete with the required suspense. Less evident though is the work behind-the-scenes; those moments of growth which leave such an impression on a country that they ultimately redefine what it means to be an African democracy. Nowhere is this more evident than during Ghana’s 2012 presidential and parliamentary elections. 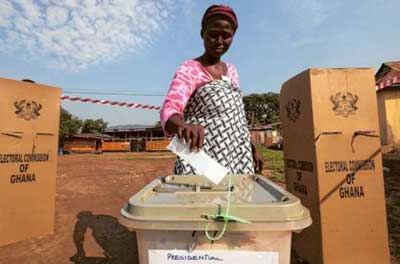 A woman votes in Ghana’s recent elections Photo: Reuters
The one-day event, which extended into a second day, went beyond most people’s expectations and had both Ghanaians and the international community riveted until incumbent John Dramani Mahama was declared President-elect. Social media emerged as an instrument for political engagement, immortalising the country’s sixth consecutive election in cyberspace with the hashtag#GhanaDecides. There was no delegation of European Union observers for the first time since multiparty elections began in 1992; a move that Ghanaians embraced as a sign of maturity and confidence in the country’s electoral and democratic systems. It was therefore no great surprise that the Economic Community of West African States (ECOWAS) observer mission, led by former Nigerian president Olusegun Obasanjo, declared the election “free, fair and transparent”. But let’s not get ahead of ourselves. As with any journey of growth there was a myriad of challenges, both familiar and alien.
The presidential and parliamentary elections took place on 7 December 2012, a day traditionally declared a public holiday. The voting public was so eager that many started queuing outside polling stations as early as 7pm the night before. While these voters were right in anticipating the long queues that contributed to the country’s highest voter turnout to date of 80%, they were probably too optimistic in expecting the polls to kick off punctually. In true Ghana man time (GMT), there were delays in the delivery of voting equipment and in opening polling stations across the country. However, these roadblocks were mere deficiencies carried over from previous elections, rather than a novelty. 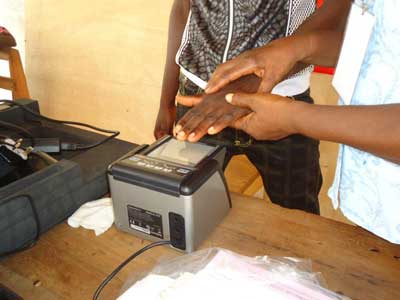 Ghana’s adoption of election technology had mixed results Photo: GhanaDecides.com
As the Ghana elections embraced technology in the form of biometric verification machines, the widespread failure of these led to a lack of confidence among the electorate in this new technical dimension. According to Ghanaian electoral rules, eligible voters had to be in the queue before polls closed at 5pm in order to vote. Given that Ghana’s Electoral Commission (EC) and political parties had agreed a “no verification, no vote” rule, there was considerable alarm among voters who were aghast at the thought of being disenfranchised due to faulty electronic fingerprint readers. As a result,the election was extended into a second day in order to transport working machines to affected polling stations and enable eligible voters to exercise their civic right.
Another first in Ghana’s electoral history was ensuring the security of the ballots cast. Passionate debates took place on the airwaves and street corners about whether vote-counting at unaffected polling stations might ultimately influence the final results. Unsatisfied with the EC’s directive that the police take custody of ballot boxes and election materials, many Ghanaians opted to spend the night at their respective polling stations; enduring the sweltering heat and persistent mosquitoes on a night jokingly referred to as Black Friday. 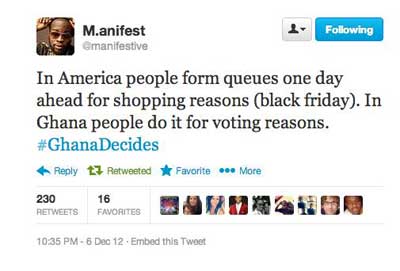 The second day of voting was relatively calm, and security personnel readily handled the few instances of unrest. Having traced the biometric machine failures to incorrect charging of batteries, the remaining registered voters who made it in line by 5pm got to cast their ballots. A lady in the affected Weija/Gbawe constituency who was finally verified by the almighty biometric machine on her second try epitomised the determination of many second-day voters.
On Sunday, 9 December  2012, the EC chairman Dr Kwadwo Afari-Gyan announced the final election results – via Facebook. Incumbent President Mahama was declared President-elect after making it across the 50% threshold with 50.7% of the 10million valid votes cast, while Nana Akufo Addo of the National Patriotic Party (NPP), his main contender, secured 47.7%. The Facebook declaration preceded a nationally-televised press conference and this elicited disbelief and excitement both on and offline. Supporters of the National Democratic Congress (NDC) commenced their victory celebrations in white, green and red party colors while awaiting the customary congratulatory call from Akufo Addo. The call never came. Instead, the NPP flag bearer rejected the results and announced the intention to go to court over election fraud; this despite the election being ruled credible by both local and international poll observers. 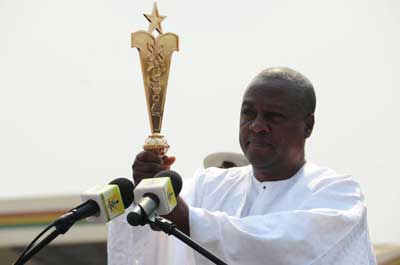 There is avid interest in what President John Mahana can achieve in his first 100 days in power. Photo: https://www.facebook.com/JDMahama
What followed will probably be remembered as one of the tensest periods in Ghana’s recent political history. There were rumours that the EC’s credibility had been compromised, while heated online debates took on caustic tones. Seemingly following in the footsteps of Egypt’s Tahrir Square protesters, hundreds of NPP supporters converged at Accra’s Kwame Nkrumah Circle for three consecutive days to protest the results. Perhaps the main deterrent to violence was the insistence on peace and the fact that all eight presidential candidates had signed a landmark Kumasi Declaration for Peace. Nobody wanted to be held responsible for disrupting the peace.
Fast-forward a month, life is back to normal in Ghana. The NPP has submitted its petition to the Supreme Court and from all indications it will be yet another opportunity to improve the country’s democratic systems and processes. While the opposition boycotted the 7 January  presidential inauguration, thousands of Ghanaians descended on the Independence Square to witness the swearing in of President Mahama and his Vice-President Amissah-Arthur by newly- elected Speaker of Parliament Edward Doe Adjaho. The event was also well attended by former presidents Kufour and Rawlings, the first lady Lordina Mahama as well as foreign dignitaries like former UN Secretary General Kofi Annan, Nigerian President Goodluck Jonathan and Liberia’s Ellen Johnson-Sirleaf. 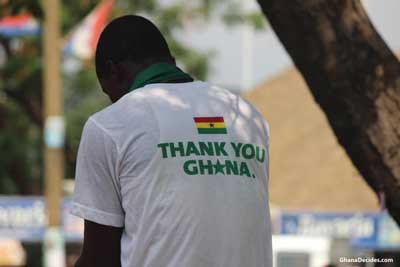 In his inaugural address, President Mahama promised a new era of partnership. Barely a week into his first 100 days, it seems Ghana’s youngest president might have a trick or two up his sleeve. Besides appointing Hanna Tetteh as Ghana’s first female foreign minister, he has also appointed non-NDC members to ministerial positions. Ghanaians online are tracking the president’s performance within his first 100 days with the hash tag #Mahama100, and will undoubtedly be on the lookout for more welcome surprises.
Looking back on the very eventful election year, a number of things stand out. First, it seems almost inevitable that Ghana will remain a two-party state for some time to come, although politics in the country has become more personality-based. With over 200,000 rejected votes, it is evident that more civic education is needed, not only for the electorate, but also for political parties who do not hesitate to call press conferences at the drop of a hat or to prematurely declare themselves victorious. Finally, the fate of social media in Ghana was seemingly sealed with that memorable Facebook declaration. All in all, Ghana is the true winner of the 2012 election, and despite the unpredictability, it represents a very welcome breath of fresh air on Africa’s political landscape.
Jemila blogs at Circumspect. You can also follow @jabdulai on twitter.

My 2020 Reflections: A Return to Essence