It’s day three of the year 2012. Already! First off, I wish each and every one of you a great year ahead. May you have enough of everything you need to achieve your biggest dream and highest potential, and may you never want for the love, support, strength and confidence to get to where you want to be.

Second, Youssou Ndour – world renowned Senegalese musician – just announced his candidature for Senegal’s presidential election on February 26, 2012! I’ll admit, the first person I thought of when I read the news was Wyclef Jean who put in a similar bid for Haiti’s presidential seat in 2010. But let’s not dwell on that. It’s a new year and if the recent past has been any indication, it’s that anything is possible. Besides, unlike Jean who didn’t even meet the constitutional requirement of having lived in the country for at least five years, Ndour has been very visible on the local scene – mainly through his music – and is also a UN goodwill ambassador.

What are the odds against Ndour? Well, for one thing, experience. While Ndour has already established somewhat of a legacy in promoting Senegalese music, he has very little – if any – experience in politics. Sure, he participated in some of last year’s rallies against current President Abdoulaye Wade and tackles issues like corruption and elitism in his music, but when it comes down to facts, his lack of formal education and experience will be highly scrutinized. That aside, with numerous businesses and a strong stake in media – he owns a TV station and radio – the question of true ‘democracy’ where media independence is concerned might pop up. Think Berlusconi. 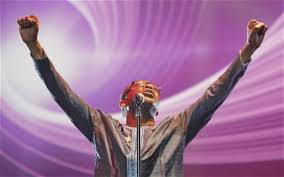 I browsed through some comments on Seneweb about Ndour’s candidature, and if those are any indication, these are but some of the challenges that Youssou Ndour might have to face. One of those is getting the religious leaders – who hold a lot of clout in Senegalese society – on his side. That will be no easy feat as some of these Muslim leaders have criticized both Ndour and his music for being ‘unIslamic’.  He will have to win the people over, show them that he is capable of succeeding in governance as he has been in music, and also, to build a strong, committed and competent team around him to achieve what he hopes to. Above all, he must not underestimate the enormity of his proposed charge, and should he win, must not turn out to be like ALL the other so-called African leaders we’ve had the misfortune of granting power.

What’s going in his favor? Well, Abdoulaye Wade. After consistently failing to fulfill his promises since first being elected president in 2000, the majority of Senegalese are fed up. There are also fears that he might try to instate his son, Karim Wade (and current Minister of State for International Cooperation, Regional Development, Air Transport, and Infrastructure, AND Energy). Last year seemed to be the final straw when Wade attempted to change the constitution and extend his presidency. People – young, old, men, women, you name it – took to the streets and protested. All this came after equally passionate protests in March dubbed “Y’En A Marre” (We’re fed up)  at the height of the food and economic crises and power cuts across the West African nation. Since then, a campaign called “Wade Degage!” (Wade, Get Out!) has been ongoing especially on social media networks pushing for the incumbent to step down.That aside, Senegal might be riding the remnants of the wave of change that swept the Arab world. If Youssou Ndour is able to play up the notion of “Power with the people”, he could potentially draw the strong following he needs in order to win or at least put a considerable dent in Wade’s image as “the only option”.

Personally, I don’t see why Ndour should not run. He’s as legitimate a presidential candidate as any other Senegalese.Some might say he’s even more ‘legitimate’ than say, Karim Wade who barely speaks the national language Wolof. Citizenship aside, I believe leaders are made, and each person deserves the chance to serve their nation as best as they can. If Mr. Ndour thinks he’s up to the charge, give him a shot. What’s there to lose? True, he might not have the experience, but with over ten years under his belt, Wade certainly doesn’t seem to be making things any better, is he? Besides, as Youssou Ndour eloquently put it, “Presidency is a function, not a career.” Many of our leaders have sought to make careers of the solemn charges granted them and look where we are now. I hope Ndour preps himself well and makes the necessary sacrifices, investments, and decisions to ensure that Senegal moves forward in prosperity. Best wishes to Youssou Ndour and to Senegal!

Same goes for all the African countries embarking on elections this year, including my dear country Ghana. Elections are a huge determinant of peace, and I pray that peace presides regardless of who wins what race. That said, and based on unfolding events in Senegal, I wonder if there could ever be an Africa Spring (after Arab Spring). Who knows?

Connect with
I allow to create an account
When you login first time using a Social Login button, we collect your account public profile information shared by Social Login provider, based on your privacy settings. We also get your email address to automatically create an account for you in our website. Once your account is created, you'll be logged-in to this account.
DisagreeAgree